You are here:
Coaching 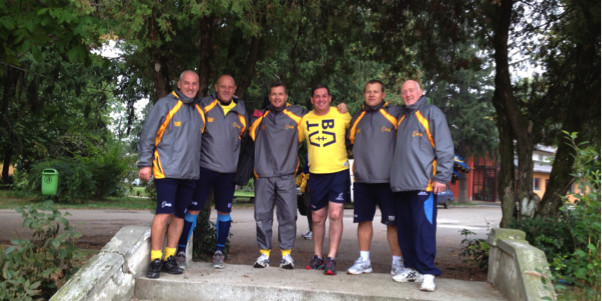 I recently spent 6 days with the National Romanian Team as the guest of former Pontypridd, Celtic Warriors and Wales Coach Lynn Howells – now Director of Rugby for the National Team in Romania.

Lynn, who also coached Doncaster, Edinburgh and in Italy with Leonessa, manages a team of coaches in International periods of ranking games and tournaments.

My remit apart from helping to coach and prepare the team was to take a look at the standard of coaching as well as give some input to their planning and organisation and their delivery. Having just acquired some new software and analysis equipment at the Federation, I was also able to give a helping hand in the analysis of training sessions and feedback to the players.

TO VIEW HIGHLIGHTS OF SEAN’S STAY IN ROMANIA CLICK HERE

At the start of the week Lynn and his coaches used the Bucharesti vs Bath Amlin Cup match to take a look at some players and I was able to cast an eye over that match on arrival and to meet up with the coaches from both sides. There was even an old Osprey friend in Paul James to see! The home team lost that match but it was a chance to work on things during a weeks’ preparation for the following game against Calvisano that again would see many of the National players exposed in the Amlin Cup.

The old National Olympic Camp just outside Bucharest was the venue for the weeks training and the surroundings and history of the place struck me when I saw the Olympic honours board with names of the calibre of Nadia Comaneci on there.

Working with Romanian coaches like Harry Dumitras (who played in Romania’s victory over Wales in 1988) and former Perpignan hooker Marius Tincu proved to be very rewarding. Former Wales Rugby League Coach Neil Kelly was also present as a part time defence coach and there was a lot of energy and enthusiasm around training. With big games in November against the USA Eagles and Japan, there was definitely a sense of urgency to do well in those games and to improve in areas such as continuity in attack, the tackle area and defence around the ruck.

Romania is a country that seems to have big strong athletes in its midst. They have a National club competition, which has a lot of overseas influence. However their coaching structure needs improving and watching National Under 18 and 19 training sessions highlights this. The development of these coaches is of paramount importance and if the IRB can assist and a programme of development is put in place, I am sure we will see Romania growing to be a stronger force in the rugby world.

Lynn Howells is also bringing out his own book called “Despite All The Setbacks”. This will be available early November. Lynn will be my guest on the

Rugby Nation Radio Show on Thursday 1st November at 6pm on Nation Radio. I also caught up with Lynn for a chat about his book whilst in Romania.

TO LISTEN TO THE AUDIO INTERVIEW WITH LYNN HOWELLS CLICK HERE